Night In The Citi

It had been a few weeks since the New York Mets opened their new stadium. Seeing how these are the Mets we're talking about, they sold the naming rights to Citi Bank, which ended up getting bailed out by the government. And naturally, the third pitch thrown in an official game (exhibition games against the Red Sox don't count) got launched into the stands by Jody Gerut of the Padres. When you're a Mets fan -- even a lapsed one such as myself -- you have to cope with this sort of stuff. 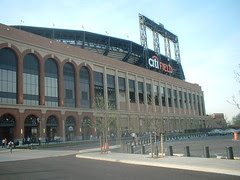 It had been four years since I had gone to Shea Stadium, which I documented on this blog. I had meant to come back before the last game was played, but I never got the chance. Today, the Mets play in Citi Field, a shiny new ballpark that owner Fred Wilpon has been dreaming about all his life; a park with the facade of old Ebbets Field and all the bells and whistles. Sure, Shea Stadium had been rendered an antique, but all it needed was some remodeling. But now, all traces of the park are gone. Some may have considered it a pit, but I reckon it was our pit.

So I decided to go see the Mets in action. This is tough for me, not just because the tickets are pricier than when I started seeing games in 1983, but also because the Mets have a ticketing plan wherein people pay more for certain dates. Click here to see what I'm talking about. It's okay . . . I'll be here when you're done.

Back? Yeah, it's insane, isn't it? Anyway, with "Value" dates few and far between, I decided to go to a Wednesday day game. But then I got saddled with taking my grandfather to a doctor's appointment. Then I had a realization: why not go the night before? It's not like I had anything worth getting up for the following morning.

Because I'm a dummy, I spent too long at home and got to the express bus stop at 4 p.m., three hours before game time. It took me over ninety minutes to get to the 7 train; I could've zipped on the 4 train downtown, but I wanted to nap on the bus. By the time I got to Citi Field, I didn't have much time to explore. Well, at least not as much time as I would have wanted. 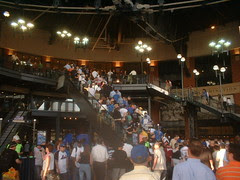 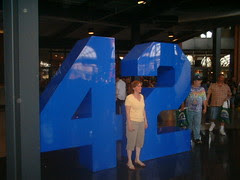 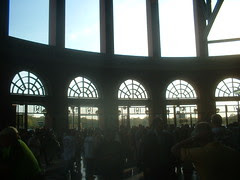 I entered through the Jackie Robinson Rotunda, which is a huge exhibition space dedicated to baseball's first black player. In retrospect, you'd think there would be something representing the Mets, but instead there's space for a guy who retired five years before the Mets were born. In short: Jackie = Ebbets Field = Fred Wilpon in the owner's box, with a hand in his pants. In Wilpon's defense, Jackie's number getting retired by Major League Baseball did happen at Shea in 1997, so there is that. It is beautiful, though . . . lots of video footage of Robinson, quotations along the walls, and a big "42" for people to pose next to, not unlike the retired numbers of Orioles players outside of Camden Yards. 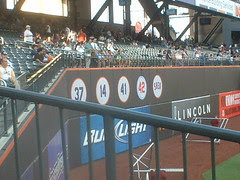 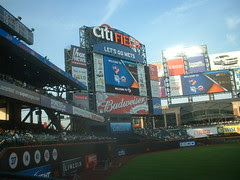 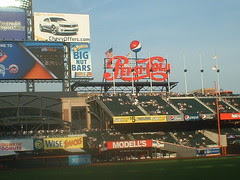 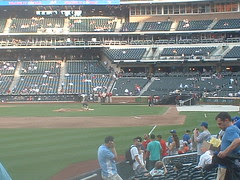 I bought a "baseline box" for $45, but I found myself in the outfield, a stone's throw away from the left field foul pole, with a good view of the retired numbers: Casey Stengel's 37, Gild Hodges' 14, Tom Seaver's 41 (I was there at the ceremony in 1987), Robinson's 42 and a circle honoring Shea Stadium. To be fair, the baseline was nearby, so it wasn't false advertising. After checking out my seat, I had to go exploring. I found myself at the Taste Of New York area, full of food stands. You want ribs? Go to Blue Smoke. Or maybe pick up something at the Shake Shack. Or play around at FanFest, maybe play the latest MLB video game. Only problem? The lines were unbelievably long, and time was short. I'm anal about baseball, in the sense that I always -- always -- have to keep score, meaning little to no movement from my seat. I ended up "settling" for a sweet sausage in a roll with onions and peppers.

Before the game, Gary Sheffield was honored for hitting his 500th home run about a week ago. This is messed up, given that a. Sheffield is a suspected steroid user, and b. His milestone homer was his first as a Met. He ended up getting a crystal bat for the occasion. Maybe that's why the Tigers cut up loose in spring training; not because he's a malcontent, but that they couldn't come up with the scratch to properly reward him. Even weirder was the montage on the video screen showing his homers for seven other teams. For a guy with Hall Of Fame numbers, he sure got around. Also, it turns out that he was the third guy in MLB history to homer in his teens and forties; the other two being Ty Cobb and Rusty Staub. That explains why "Le Grande Orange" was at the festivities.

After cellist Bianca Kovic played the national anthem, it was game time. The Mets were one game under .500, facing the slumping Florida Marlins. The starting pitchers were playing Who Wants To Remain In The Rotation?, with Livan Hernandez taking the stage. He did well; he only pitched five and a third innings and gave up three runs, but he struck out five. The Mets went out to a quick lead after Sheffield, the man of the hour, tripled in two runs in the first. By the time the seventh inning rolled around, the Mets were up, 4-3. I was comfy with my seat; one thing that I saw with the new park was that the vendors were always there. Sure, I'd have to get up to get ribs, burgers or fries. But if you want the staples -- beer, soda, franks, ice cream, peanuts, Cracker Jack, etc. -- all you needed was a loud voice and money. And with the Mets up, I knew what would happen; they'd turn to setup man J.J. Putz to hold the eighth inning (that's "Putz" as in "Puts 'em away"), followed by Francisco "K-Rod" Rodriguez saving the game at the ninth. Simple, right?

Enter reliever Sean Green. Top of the seventh inning. After walking Alfredo Amezaga, Green struck out pitch hitter Ross Gload for the first out. Emilio Bonifaco singled, followed by Amezaga stealing third. One ground ball from Cameron Maybin, the game was tied. John Baker walked, leading to Jorge Cantu coming up to bat. First of all, is it obvious that I'm writing all this off my scorecard? Secondly, Cantu had already homered in the fourth. Tied score, late in the game . . . you can probably guess what happened next. 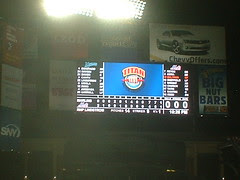 Cantu homered to center. Marlins led, 7-4. And nothing really happened after that. The Mets only got one hit in the final three innings. This wasn't as ugly as the time I went to the Braves/Mets game in 2001 when Armando Benitez blew a big game, the Mets lost in extra innings, and I ended up spitting on a belligerent Braves fan after the last out . . . but it wasn't fun. I mean, the stadium makes me what to come back and spend more money, but a win would've been nice.

Epilogue: The Mets didn't fare well the following day, so I didn't miss out on anything. Johan Santana had trouble early, and his ERA swelled to 1.10, but the Mets supported him. Then Putz blew the game, and the Mets couldn't make up the difference. New park, same Mets. At least they haven't been forced to slash prices on their pricier seats, unlike the Yankees.
Posted by Jason at 12:43 AM No comments: