I'm starting off my A-To-Z Challenge with Brent Anderson. I have only met him twice . . . both times in San Diego for Comic-Con International (or SDCC, if you'd like). Some people know him as the artist behind X-Men: God Loves, Man Kills and Strikeforce Morituri. In 1995, he provided the art behind Kurt Busiek's Astro City, which was a breakout hit. While Astro City has been published in several formats under different imprints (Image Comics, Wildstorm Comics, Vertigo), the book has been on the short list of many "best of" lists over the years, and Brent's visuals are a big part of that. Because I don't see Brent often, I have gotten characters from the book sketched by other artists.

The two characters I got sketched by Brent were from Astro City, and both from stories that I got letters published (back before the advent of the message board). Jack-In-The-Box is the clown-themed hero whose acrobatics and gadgets (including catapult limbs and shock rubber noses) make him a grade-A crimefighter. Jack first appeared in the third issue of the third volume, where a low-level criminal tumbled to his secret identity. In issues #11-12, Jack faced nightmarish versions of his children, and he wound up passing the mantle in order for his unborn son to have a normal life. Here's what I acquired in 2003: 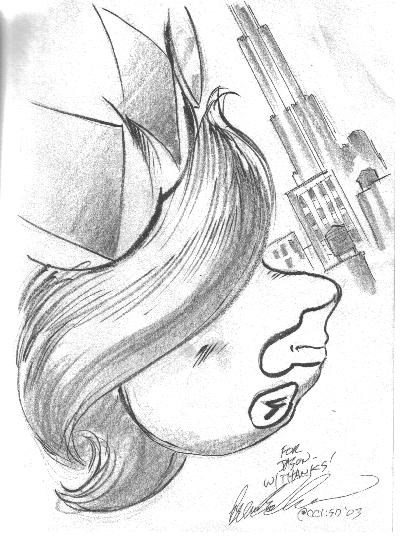 On the other side of the hero/villain spectrum is the Junkman. Hiram Potterstone was a man who turned criminal after he was forcibly retired from his job, relying on his unique inventions for his scores. In Astro City #10 (second volume), he pulled off the perfect heist and retired in luxery, only to find that people not knowing of his deed was unacceptable. He wound up getting caught pulling a similar crime by Jack-In-The-Box, but he was certain to slip away and plot anew. This comes from 2009. 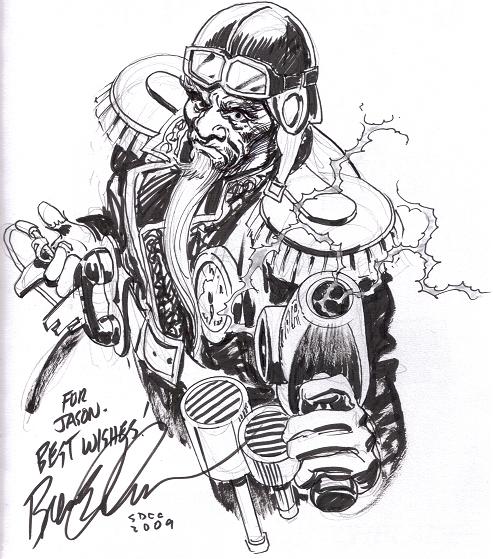 Email ThisBlogThis!Share to TwitterShare to FacebookShare to Pinterest
Labels: The A-To-Z Challenge 2016